Whether you’re writing book-length fiction, screenplays, memoirs, or short stories, three act story structure can be helpful to you. The best thing is that it works whether you’re a plotter or a seat-of-the-pants writer.  Of all the things I’ve learned over the years, three act structure has been the most helpful to me.  Even though I’m more of an organic writer, meaning that I like to just start writing an let the characters take over, three act structure helps give me a roadmap as I work.  You’ll find this general underlay in all of my novels.  Incidentally, it’s fine to be either a plotter or a seat-of-the-pants writer.  We’re all different.  Whatever works for you is the way to go.

Various forms of three act structure exist. Mine is simpler than some. I’ve enjoyed teaching this course both online and live over the years, and after having many requests for the handouts, I decided to put the kit online. To get the full benefit of this material, grab your favorite movie (or get together with friends and grab several) and analyze the story according to this outline. Disney movies are great for this, by the way. When I teach this class, I often use clips from The Rookie.  It’s interesting to see how the writers took a man’s true story and pared it down to a clean three-act story.

I’ve also taught this workshop in schools. Analyzing (or story mapping) the plotlines in movies, books, or short stories is an excellent way to teach kids to analyze, dissect, and think critically.  It’s also a low-pressure way to add a little learning to those watching-a-video times in the classroom.

**Copyright Notice: Please feel free to use this material in writer’s groups and school classes, but do not alter the material in any way or remove the copyright notices. No permission to re-publish for profit or to re-post on the Worldwide Web is granted or implied here**

Unlikeable main characters are a common problem in fiction.

Every hero (main character) in a story must have at least three of these characteristics:

Setup -Shows the characters, where they live, what the do, and gives us some reason to be attached to the main protagonist.  We see the character’s mask—the identity he feels he must present to the world, and perhaps even believes himself, but the mask is in some way at odds with his authentic self.

Explosive Incident – This blasts the plot into motion.  It is big, big, BIG—a life-altering disaster that leaves the character spiritually bereft.  We get the first glimpse of the authentic self beneath the mask.

The longest, most involved part of a book or movie. The audience begins to see there is a shaping process happening.  The character vacillates between living beneath his “mask” and living as an authentic self.

In Part 2, the character begins a journey, in which he tries different ways of solving his problem (lost job, lost girlfriend, lost family, loss of faith, loss of happiness, etc).

The Maze – Part 2 sends the character through a maze, in which the way out is not clear. The character tries different passages which look promising, but is blocked each time, and forced back to a lower and lower starting place.

Mid-point Solution – Somewhere near the middle, it begins to look like the character may be able to solve his problem by cutting corners, by making spiritual and moral compromises, or by settling for life behind the mask and repressing the authentic self.

Mid-point Crisis – Halfway through the maze, the character is confronted with the fact that there is a man-eating tiger in the maze with him.  There is no going back and there’s a new sense of urgency.  The mask is no longer an option.  The character must find a way to exist as the authentic self.  This sets up a new set of circumstances, which will change the rules for the rest of the journey.

Red Herring Solution – Usually comes just before the final crisis.  Temporarily fools the character and the audience into thinking the problem is finally solved.  Often one last attempt to revert to    life behind the mask.

Culminating Crisis – Huge life or death crisis in which the character finally has to confront and defeat his demons.

Highest Point – Directly following the culminating crisis is the highest point in the story. The character (and audience) are suddenly lifted out of the depths of hopelessness by a miraculous event, superhuman effort, divine intervention.  Success! The demons are defeated!  The mask is gone and the character is fully living as an authentic self.  This is what the audience has been waiting for!

Resolution – Resolution quickly follows, basically showing they will live “happily everafter”.  A few pages in a book, a few minutes in a movie… and cut, it’s a wrap. 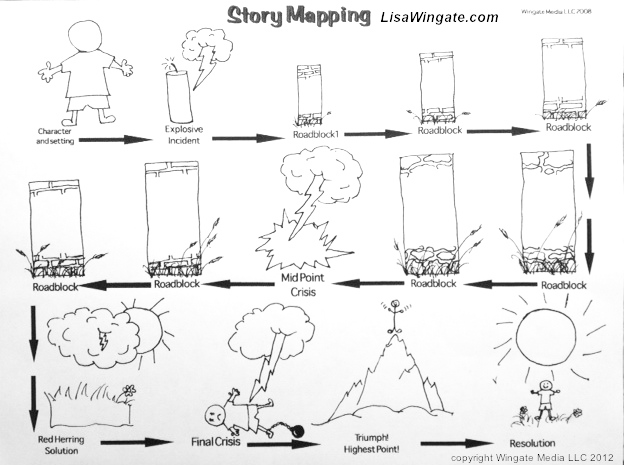 What Others are saying

“Teaches us that it’s never too late to open our hearts.”
— Southern Lady Magazine

“God has gifted her with a marvelous talent!”
— NYT #1 Bestselling author, Debbie Macomber

“Sure to delight!”
— Blogcritics.org

“A rising star in the world of women’s fiction.”
— RT Bookreviews Magazine

“Not to be missed… a perfect 10!”
–Romance Reviews Today

“Will touch your heart from the first page to the last.”
— Kristin Hannah

“An excellent read for any season. A celebration of the power of love.”
— El Paso Times

“Lisa Wingate is making a national name for herself as an excellent storyteller.”
— Abilene Reporter-News

“This is storytelling at its best.”
— Julie Cannon

“Reminds us that it is love that changes our world.”
— NYT Bestselling author, Patti Callahan Henry

“Will take root in your heart and stay.”
— NYT Bestselling author, Karen White